Ready to embrace the pirate's life and set sail in search of treasure? Chests of Plenty is here to give you the full experience, complete with a parrot, treasure map and incredible loot. This slot game has a progressive jackpot and varied bonuses which are sure to make you shout ahoy!

About Chests of Plenty

Chests of Plenty has some great spins and animation that work perfectly with the crisp graphics. While the game does look a bit basic compared to some other flashier titles, the variety of bonuses and big wins certainly make up for it. That's before we even start talking about the progressive jackpot, which has been known to pay out over $1,100,000!

With 20 paylines to help you win often, these 5 reels are filled with excitement.

Who is ready to win a big progressive jackpot thanks to an immersive pirate game? We arrr!

There are 2 bonus rounds in Chests of Plenty, the first of which is the Treasure Map bonus. If you find 3 or more treasure map icons across the reels, you'll be taken to a separate mini game where you spin a wheel, move through spaces and try to pick up maps and extra prizes. If you got to this bonus mode with 3 maps, you'll start on the least valuable island, needing to collect 3 more maps before you can move on to a more valuable island. Of course, getting 5 treasure maps at launch will start you at the best island with the chance to win the biggest jackpots immediately.

Speaking of jackpots, we're sure you're hoping to snag that progressive, which is done from the second bonus game, the Chest Bonus. Find 3 treasure chests scattered anywhere on the reels and you'll watch them move to the center of the screen where 3 jewels will be revealed in each chest. Matching gems pay out lucrative prizes, with the progressive jackpot going to the lucky player who finds all diamonds. 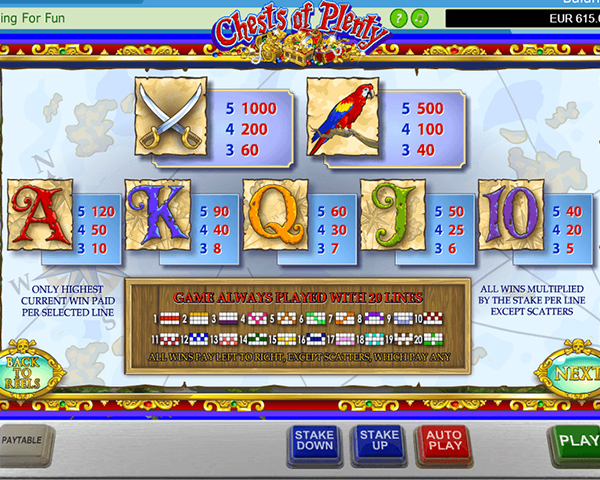 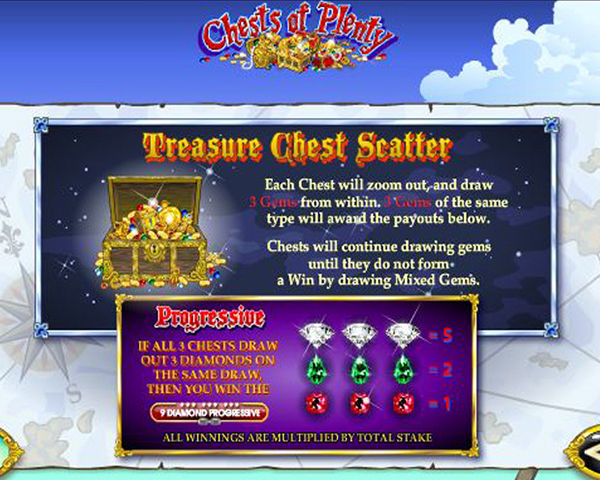 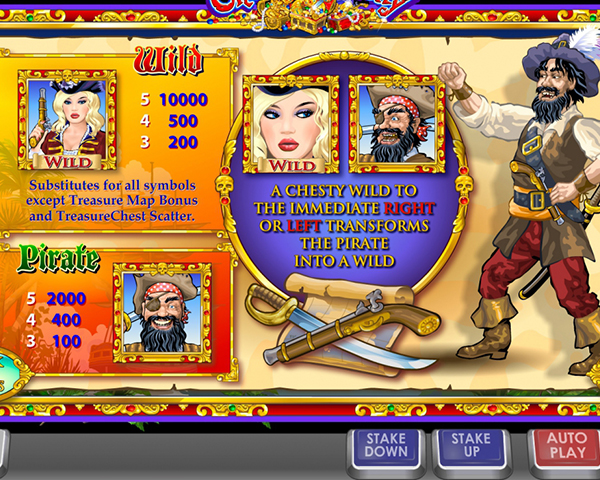 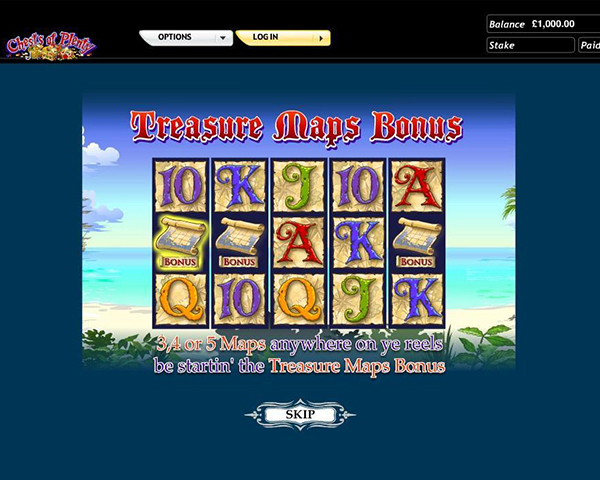 Where To Play Chests of Plenty

Even though other games are more well - known, this is still a popular slot game, which is why you'll find it at many of the best online casinos featuring Playtech games. You'll be able to decide if you want to download the software to your computer or mobile, or you can play no download Chests of Plenty in your browser instead. Either way, the gameplay is the same and you'll get access to those same bonuses and the casino's progressive jackpot.

In order to give you the most unbiased, detailed online slot reviews, we assess each game across a variety of criteria. These include:

Bonuses & Extras: How does the game set itself apart by giving players something more? While the core slot action is always great, we're pleased to see when games offer instant prizes or extra free spins.

Coins & Payouts: Is this game worthwhile for high rollers or only for penny slot fans? What wagers are available and what kinds of payouts can you expect as a result?

Jackpots & Wins: How does the jackpot work? Are all the winnings tied up in the progressive prize or can you expect decent payouts along the way?

Return to Player (RTP): Slots are fun and exciting, but it also comes down to money. Just how much does the game payout? How much can you expect to lose or win with a particular game in the long run?

One of the biggest appeals of the Chests of Plenty slot game is the progressive jackpot. This varies from one casino to the next, which is yet another reason why it's always best to play at a top-rated site. In general, the progressive gets rather high, with some casinos currently listing it at over $400,000. When it was last won, it hit at a whopping $1,100,780, making one lucky player an instant millionaire.

Chests of Plenty captures the pirate vibe with the use of pirates as symbols, along with a parrot, crossed swords, treasure chests and treasure maps. The reels are padded out with the usual playing card symbols, making the bigger wins stand out that much more thanks to the unique icons. There are some excellent sound effects used throughout, although we wish the female pirate didn't sound so ridiculous. Still, all the different styles and noises add to the immersion as you spin the reels.

The pay table is a bit heavy in Chests of Plenty, with the top paying icon of the female pirate, who is also the wild, paying out 10,000 coins for 5 on a line. The next 3 high - paying icons give 2,000, 1,000 and 500 coins for 5 of a kind, with the rest of the pay table dropping rather abruptly from there. There are also excellent wins to be found in the bonus games, with many players getting 50 - 100x their wagers from this game during a single bonus.

Playing Chests of Plenty on mobile means getting to spin the reels anytime you like. By using your favorite online casino, you'll get access to the same account, wallet and VIP progression as you swap seamlessly between devices.

Playtech continually toils to make their mobile gaming even better, using the latest technology that makes it easier for games to work across all platforms. As the first developers to make their games available on mobile devices, Playtech knows how important it is that their games work on iOS, Android, Windows, Kindle Fire and BlackBerry smartphones and tablets. That said, they do need to prioritize their mobile development, and you may find that you get a better experience using iOS and Android.

We know you enjoy playing slots on the go, but it's still important to always be aware of your surroundings, particularly when making a sensitive transaction. Never use an open WiFi network when making a deposit or withdrawal as the connection might not be secure.

Age of the Gods - Goddess of Wisdom
Rating 96%
Try game

Age of The Gods - King of Olympus
Rating 96%
Try game

Chests of Plenty has a ton of loot to go around. You'll enjoy the excellent bonus rounds, and all you jackpot hunters can have a blast on the high seas searching for that lucrative progressive jackpot. Even though the theme won't appeal to everyone, we're confident that many of you will adopt this as one of your favorite games of 2023. Be sure to visit one of the best online casinos and start playing Chests of Plenty today to win big.

Age of the Gods - Goddess of Wisdom
Rating 96%
Try Game