Tomb Raider has been both a popular series of video games, as well as a really popular movie franchise. What many don't know though is that it's also a really good online slot machine! On this page about Tomb Raider, we'll tell you everything you need to know, so you can decide if this slot is perfect for you.

You should play Tomb Raider online today, as it offers a huge jackpot, as well as some exciting bonus features.

It would be a lie to say that Tomb Raider is one of Microgaming's latest slots, as it has actually been around for quite a number of years. Despite the dated graphics, this slot has managed to remain a firm favorite with online slots players though, and this is for two reasons: the exceptionally enjoyable gameplay and the huge prizes.

Some of the most impressive aspects of this slot are:

If you're looking for fun and action on every spin, the Tomb Raider online slot should be perfect.

Tomb Raider keeps things simple by not having an excessive number of different paylines. Instead, the maximum number of paylines at this slot is just 15 - far fewer than many other video slots nowadays. You can even choose to lower the number of paylines, and some will even play with just a single payline active. You can also easily change your bet amount.

The gameplay of this slot is also made very easy thanks to the simple buttons found below the reels, which allow you to quickly adjust your bet and paylines. Clicking on the "Expert" tab will also allow you to use the autoplay feature, which is great for those looking to play for a longer period of time. 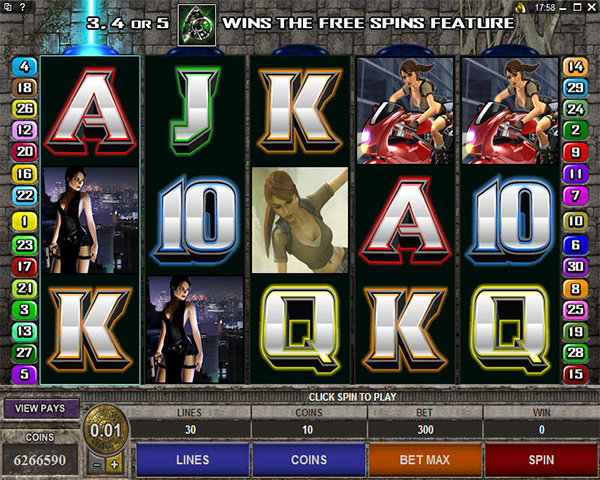 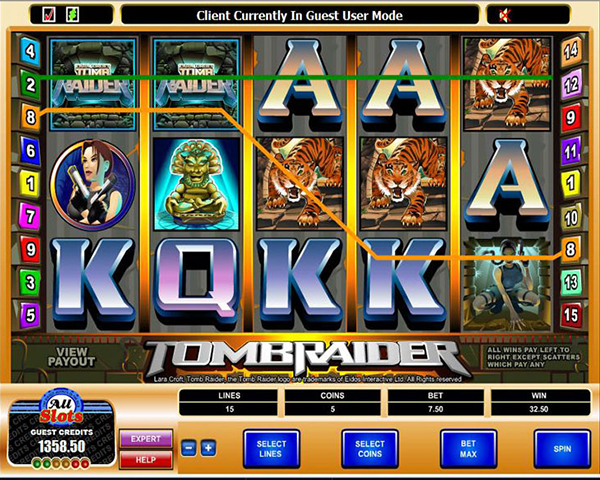 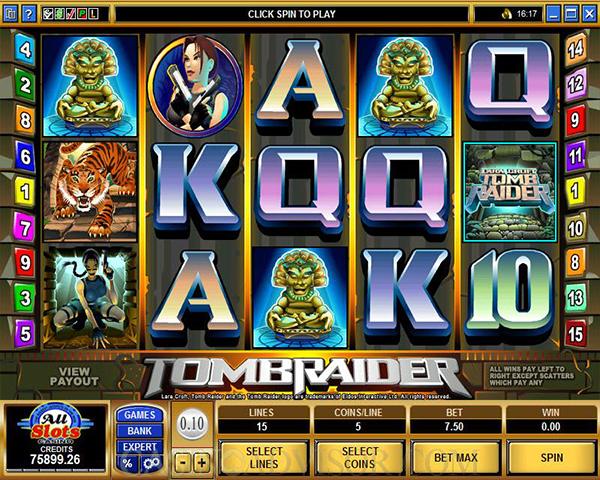 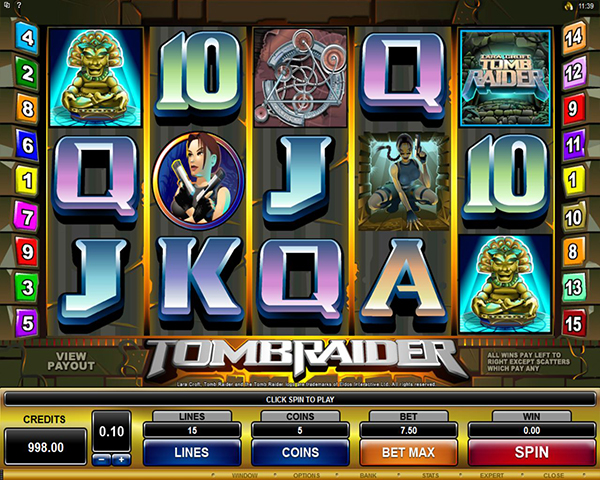 Where To Play Tomb Raider

There are loads of different online casinos using software from Microgaming, therefore you'll have lots of choice when looking to play Tomb Raider. To find the top site for you, just look through the sites we've listed below and pick the one that appeals most to what you're looking for.

There's nothing we don't mention in our online slot reviews, and every review will feature important information such as:

Compatibility: Do you want to play using a mobile device, as well as a desktop? You'll see if this is possible when you read through one of our reviews.

Bonus Features: Bonus features are one of the most exciting parts of a slot machine, and you'll see how to activate them in every review.

RTP: The RTP is expressed as a percentage and shows how much you should win. We've listed it in every review, so you always play the slots with the best RTPs.

Bet Levels: The best slots have a wide range of bet options, making them perfect for both new players and those looking to play for larger sums of money.

There are two special features at this slot. The first is a picking game and it starts when you manage to get three or more bonus idol symbols on the reels, leading to a prize of 2,500x your payline bet. The other is free spins, which occur when you get three or more scatter symbols anywhere on the reels. While free spins are active, you will find that all wins have a 3x multiplier attached to them. The spinning reel action can be pretty lucrative.

The graphics at Tomb Raider are slightly dated because this slot has been around for a very long time. So, when it was first released, the graphics were actually incredibly good! 3D graphics and fancy animations have now made this slot look a bit old-fashioned, however, this shouldn't spoil your enjoyment when you play this massively exciting online slot from Microgaming. The design doesn't affect the juicy payouts!

The maximum possible prize at this slot is a massive 7,500x your bet per payline, which happens when you manage to get five Tomb Raider logo symbols across an active payline. The other high-paying symbols at this online slot include the mysterious artefact and Lara Croft herself, while the two different bonus games can also lead to massive prizes for the luckiest of players. The lower prizes are attached to the generic 10-A symbols, as is usually the case. Just like most other slots, the more money you bet, the more money you can potentially win. So, think about how much you bet carefully!

Tomb Raider can easily be played using a mobile device and doing so will not use up loads of your precious data. So, you'll be able to spin the reels for ages, and not see much of a dent at all in your data allowance. Of course, connecting to WiFi is preferable though, as WiFi connections are more stable and shouldn't drop out when you're in the middle of a winning streak.

That being said, it's worth noting that when you're on an open WiFi connection to take care of your data as it may not be totally secure. The last thing you want to happen as you're cashing out on mobile is that someone pinches your credit card details in the process.

You can use pretty much every mobile device to play Tomb Raider, providing it has a touchscreen and that it connects to the internet. iPhones and iPads can certainly be used to play, as can all Android devices, such as the Samsung Galaxy. If you own a device from HTC, Google or Amazon, you should also easily be able to enjoy spinning the reels at this Microgaming online slot.

Tomb Raider might not have the sparkling graphics of new online slots but it's still a great game to play, thanks to the bonus features and the rather impressive prizes. You can play this online slot machine at nearly all Microgaming online casinos, so you should look through our recommended places to play and head to the site that suits you best.