Did you love the original Thunderstruck slot? If so, you should really enjoy the sequel, Thunderstruck II. On this page, we're going to take you through everything you need to know about this fantastic online slot from Microgaming, so you're ready to play it at your favorite online casino site.

Spin the reels of Thunderstruck II today and see if you can scoop this game's absolutely huge jackpot!

Thunderstruck II is the follow-up to the massively successful Thunderstruck, and it improves on the original in pretty much every area. It offers more special features, higher prizes, and more excitement on every spin. What's more, you'll enjoy this game even if you haven't played the original, although we would recommend spinning the reels at Thunderstruck as well!

Thunderstruck II is great, and here are a few reasons why:

Thunderstruck II is even better than the original, and you could win a massive 2.4 million coins.

This is a slot with five reels and three rows, and you will find 243 different ways to win. This means that there are no paylines. Instead, you simply must get three or more identical symbols on consecutive reels, starting from the first reel. Although it's not possible to change the number of ways to win, you can easily alter your bet.

You'll also find a really cool achievements feature at this slot. It has no bearing on the amount of money you win, but it does help to motivate you to play more, plus it also lets you keep track of your winnings. It's little things like this that differentiate good slots from great ones. 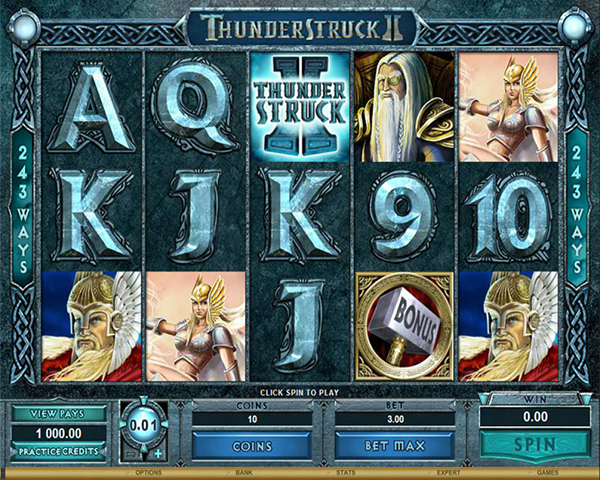 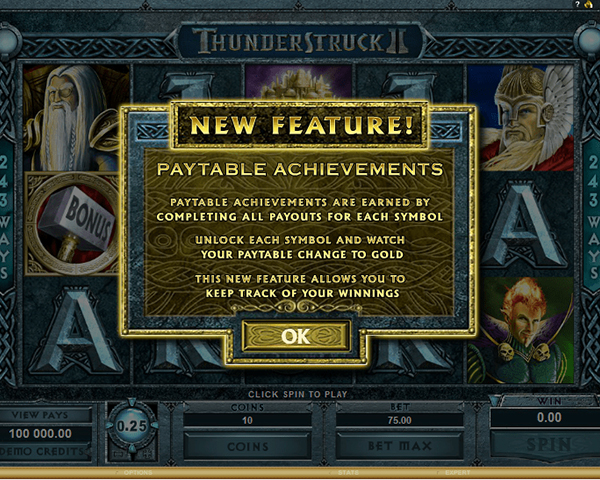 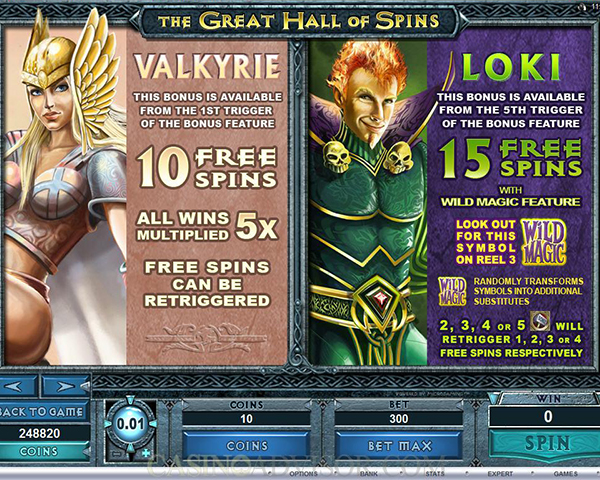 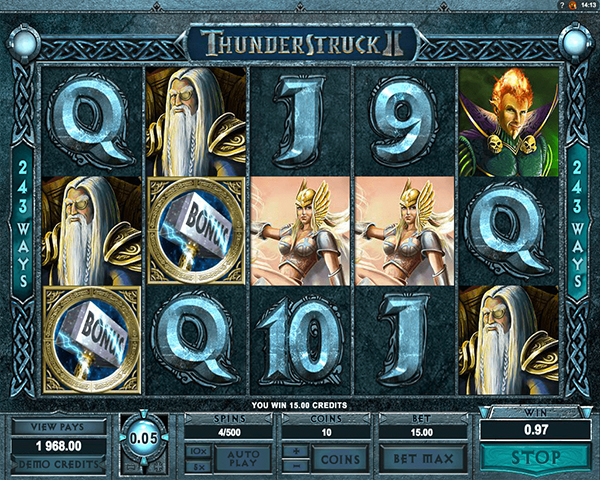 Where To Play Thunderstruck II

Thunderstruck II can be played at absolutely loads of different Microgaming casinos and finding the best casino for you is really simple. Just take a look through the list of recommended casinos below and read our expert reviews. You can then choose the casino that perfectly suits your requirements.

Our slot reviews are renowned for being some of the most comprehensive around, talking about things such as:

RTP: The RTP tells you how much money you should win when playing over a long period of time, so we only recommend slots with impressive RTPs.

Jackpot: Does a slot have a fixed jackpot, or does it offer a progressive prize? You'll find out when you read through one of our online slot reviews.

Compatibility: All our reviews will tell you whether you can play the slot using a mobile device, as well as when using a desktop computer.

Producer: We know that many slots players are loyal to one particular slots producer, so we'll always tell you which company has made the game.

The Wildstorm feature can occur randomly and turns up to five reels completely wild. The main bonus is the Great Hall of Spins, which is activated when you get three or more hammer symbols. You'll initially start with the most basic free spins feature, however activating the feature multiple times will lead to better free spins features being awarded. The best is Thor free spins, and these are well worth waiting for. The other free spins features are based on Valkyrie, Loki and Odin.

Thunderstruck is a classic, but the graphics were starting to look a little bit dated. This has been remedied in Thunderstruck II though, as the graphics look much sharper and the symbols have been designed with more care and attention. You'll even now find animations when you get wins! So, if you like your slots to look good, Thunderstruck II should be a fantastic choice for you.

The top prize at this online slot is a massive 2.4 million coins! This is won when you manage to get the reels filled with wild symbols, something that is made possible by the fantastic Wildstorm bonus feature. This means that the jackpot at this online slot is one of the biggest around, with the exception of progressive jackpots. Other high-paying symbols are the three different characters from Norse mythology, although their top prizes are nowhere near as large as the jackpot. As you've probably guessed already, the lowest-paying symbols at this slot are the 10-A ones, although even they can lead to decent prizes.

In 2023, it is more important than ever to offer the chance to play using a mobile device, and you can certainly do this when you choose to play Thunderstruck II. All forms of smartphones and tablets can be used to play this slot, from iPads through to Samsung Galaxy devices, and iPhones through to Amazon Fire tablets.

All future mobile devices should also be compatible with Thunderstruck II too. This is because Microgaming works tirelessly to improve its mobile gaming experience. It uses special HTML5 technologies that work with a device's browser to ensure that, no matter the type of phone or tablet, it will adapt to every screen and run like clockwork.

We know that some people are nervous about playing slots with their mobile device though, as they're worried that it'll use up all their data. This shouldn't be a concern though, as unlike some other games, slots don't use much data at all. So, you can spin the reels of your favorite online slot game without worrying about incurring additional data charges.

Thunderstruck II deserves to be seen as not just one of Microgaming's best ever slots, but one of the greatest slots to ever be created. It offers absolutely everything you could want, from a massive jackpot to some exceptional bonus features. You can play for hours without ever getting bored. So, if you're looking for a new and exciting online slot to try, we'd certainly recommend Thunderstruck II!