Living out in the boonies might not sound like fun to everyone, but you'll embrace the freedom and excitement when you play Hillbillies. Whether it's the moonshine going to our heads, or the gold that's hiding in these hills, we're sure that this slot will appeal to a ton of slot fans out there. Find out why in our Hillbillies slot review.

There's gold in these hills, or at the very least a wild and exhilarating good time thanks to great bonuses and frequent wins.

Filled with clichés and stereotypes, Hillbillies wants you to laugh and have some fun while you win big. The symbols include things like a pig in a barrel bathtub, three different hillbilly characters, and even some moonshine. While this theme might seem silly to some players, we're sure that many others will enjoy the lighthearted style. Plus, with excellent winnings up for grabs, we're sure you can look beyond the theme and enjoy the big payouts.

Get ready to cook up some celebratory moonshine thanks to the excellent payouts across the 20 paylines.

Put aside your prejudices and embrace the Hillbillies with this rewarding and truly exhilarating slot game.

All you need to start the bonus round is to find two or more hillbilly characters across reels 1, 3 and 5. This will give you 8 free games with a 2x multiplier. Free games can be retriggered if more hillbillies appear on the reels. These icons also act as the wild symbol, plus they have 2x multipliers as well. So contrary to pop culture, encountering hillbillies shouldn't make you worried, but will be a sign of big wins coming your way.

Hillbillies cumulatively multiply your wins by 2, 2 and 5 when used in a winning combination. As a result, not only could you end up triggering a free spin bonus, but you could end up with a 20x multiplier on your spin's win. It's thanks to this unique approach to using the same icons in new ways that Hillbillies feels like a fresh and fun slot game, despite its quirky and unusual theme. 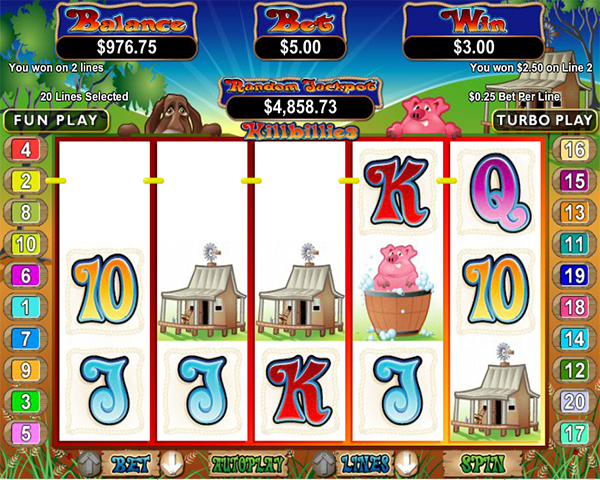 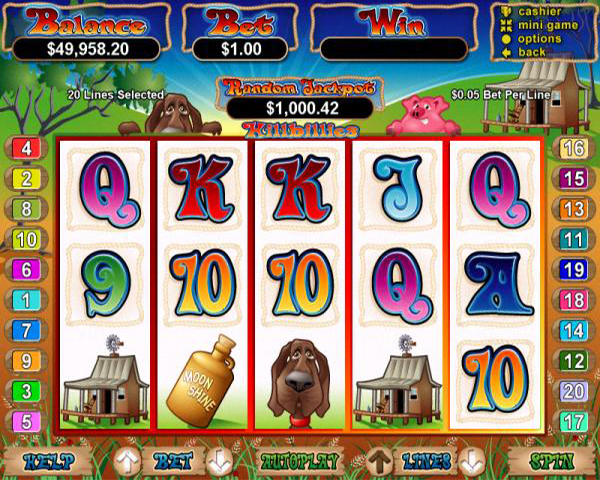 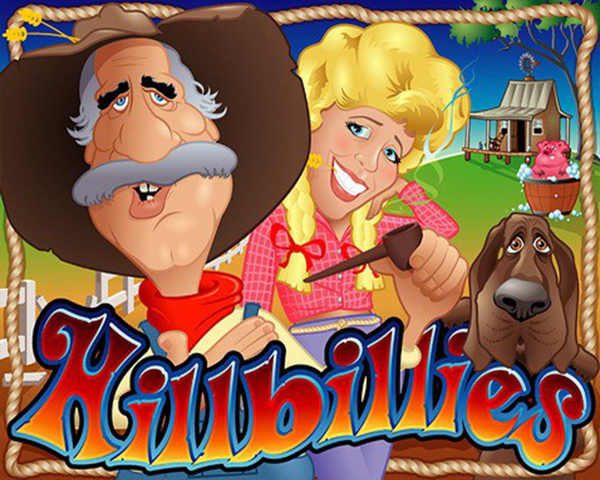 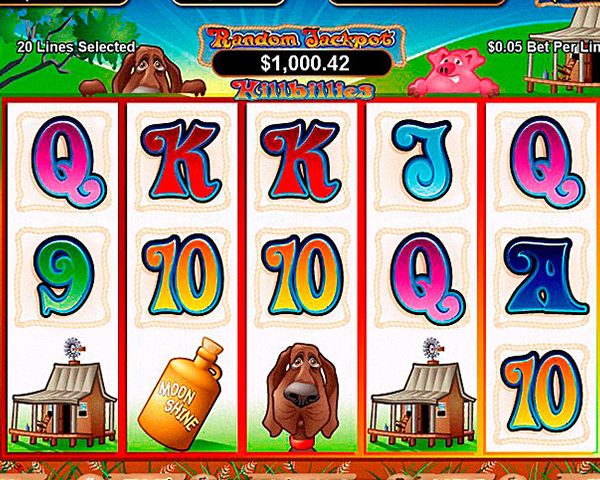 Where To Play Hillbillies

Any online casino that's featuring the RTG library of games will probably also offer Hillbillies. You can download the software to your computer or mobile if you like, or else you can enjoy playing instantly in your browser. Both forms of the game offer the same gameplay, payouts and even access to the progressive jackpot.

All our online slot reviews need to be detailed and unbiased, which is why they assess a variety of different elements. Some aspects covered include:

Graphics & Design: What's the look and feel of this game? Are the symbols and soundtrack contributing or detracting from the overall immersion and experience?

Bonuses & Extras: What does the game add that distinguishes it from other slots? How are players rewarded with different bonuses or extras?

Coins & Wagers: Is this a game that's only for penny players or also high rollers? How much will you need to wager, and how much can you expect to win.

Compatibility & Availability: Will this game work on a range of different devices? How easy is it to find at the best online casinos?

Like many RTG slots, there's a progressive jackpot that lands randomly while playing Hillbillies. This jackpot can vary from one casino to the next. Because it's divided by casino rather than according to some kind of unified network, the maximum prize doesn't go up as high as other progressive jackpots from different providers. However, with frequent payouts around the $10,000 mark, we're sure players will enjoy this rewarding progressive jackpot nonetheless.

RTG took a bit of a risk releasing a game that focuses on Hillbillies, mainly because of how such people are depicted in other media. The game could alienate some players with its tin shack and rocking chair symbol, as well as the moonshine, stereotypical characters and pig in a bath. However, by keeping it lighthearted and fun, we're sure that most players will be able to look past some clichés to enjoy the overall look and feel of the game. The soundtrack works well to add immersion in the game, especially during the free spin bonus.

You can wager anywhere from $0.01 to $100 per spin, making this a game for a variety of bankrolls. The top payout that you can expect from a single line is 5,000 coins, with the next highest still giving you 4,000, 3,000, 2,500 and 2,000 coins. The lowest payout you can get for 5 of a kind is 100 coins, making this a well-balanced paytable that rewards you all the way down. Add to this the big wins you could snag during the bonus games, and we're sure you'll be excited to spin the reels.

Head into the hills and start winning big when you play from the palm of your hand using your smartphone or tablet. You can play Hillbillies on mobile and get the freeing experience of playing at home or on the go. Using your favorite online casino, you'll get access to the same account, wallet and VIP points while playing for that progressive jackpot, switching easily from computer to mobile and back again.

Real Time Gaming (RTG) works continually to improve the mobile experience, using the latest technologies to help make all their games run well on all modern mobile devices. Because of instant play in your browser, you'll be able to play on iOS, Android, Windows, Kindle Fire and BlackBerry smartphones and tablets. That said, the best experience will usually be found on an Apple iPhone or iPad, or an Android device like the ones made by Samsung, LG, Huawei or Motorola.

Playing Hillbillies on the go is a lot of fun, but you still need to be aware of your where your play, especially when you're making a deposit or withdrawal. Avoid using an open WiFi network for banking transactions because others may be able to access your data. It's also good to remember that slots can use more battery power, so if you're planning on playing for a long period of time, you might want to recharge your device.

As proved throughout this Hillbillies review, this is an excellent slot game that features fun gameplay and great payouts. With wilds that also trigger the bonus and add multipliers, plus all the great free spins, you're sure to find plenty of big wins. Then there is still the progressive jackpot, which could add a few thousand dollars to your account at any point during play. Start playing Hillbillies today at one of the best online casinos of 2023 and prepare to get a hankering for some moonshine.