Dragon's Treasure is yet another great slot from Merkur. It's got everything you could ever hope for from an exciting theme, all the way through to big prizes. Why not take a look through our Dragon's Treasure slot review below, and see if this is the perfect slot for you to start playing today?

With fire-breathing dragons and an intrepid hero on the reels, you can be sure that every spin at Dragon's Treasure is going to be an exciting one. Even if you don't manage to win the stunning jackpot, which is worth 100,000 coins to those playing at the highest stakes, you should still enjoy every spin.

There are loads of reasons to play this slot, including those listed below:

With fantastic graphics and big prizes, everyone should love playing Dragon's Treasure from Merkur.

This is undoubtedly a simple slot. It only has five paylines and a single bonus feature, plus the same symbol acts as both the wild and the scatter. Simplicity isn't a bad thing when it comes to slots, though, and the simple gameplay actually makes this game fantastic for those new to the world of online slots.

Unlike some slots, you shouldn't find the various buttons to be too confusing, as there are only four of them. The buttons to the left allow you to adjust your bet size (the higher your bet, the more money you could win), while the ones to the right control the autoplay feature and set the reels spinning. 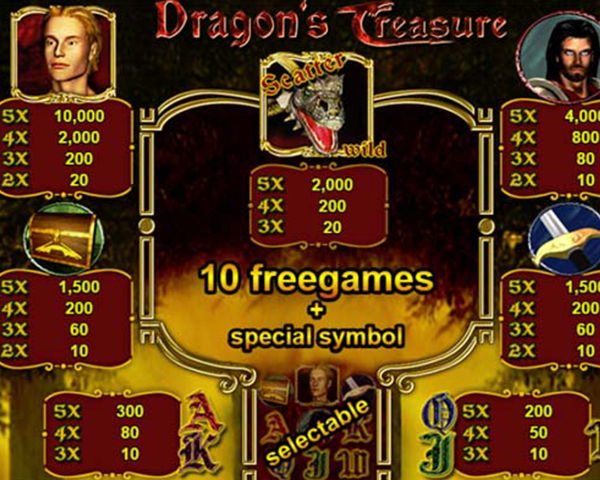 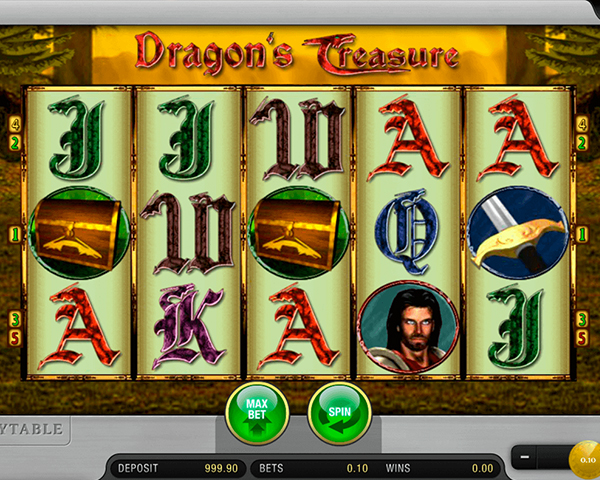 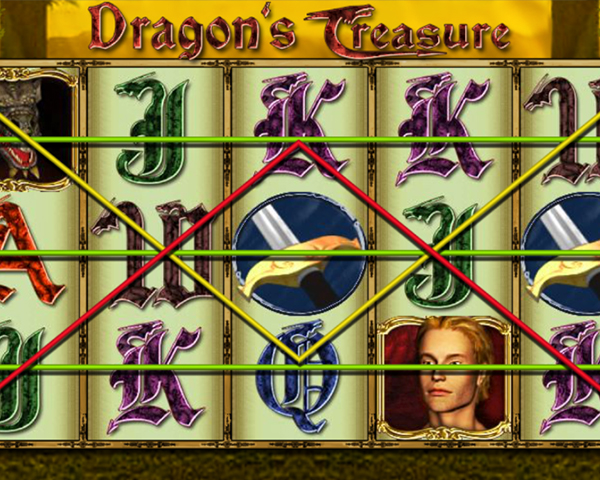 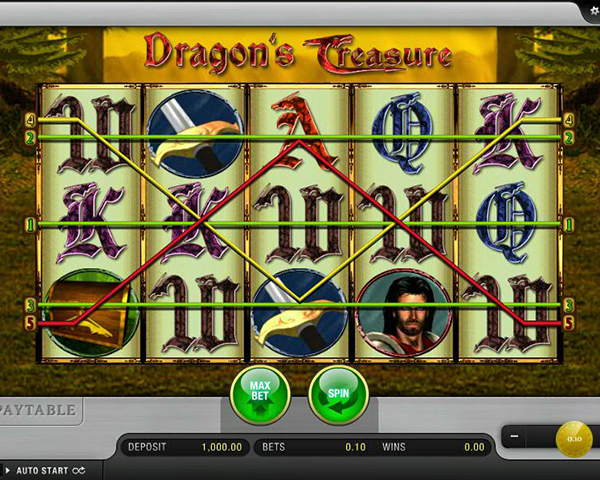 Where To Play Dragon's Treasure

You'll find many fantastic online casinos offering Dragon's Treasure within their portfolio of games, but how do you know which are best? The answer is simple: just pick a site from our list of recommended online casinos, all of which have been reviewed by experienced online slots players.

We take pride in our slot reviews and spend ages completing each one, looking at many important aspects of each game, like:

Return to Player: We only recommend the slots that have the very best RTPs, to ensure you've always got a great chance of winning some real cash.

Jackpot: A slot simply can't be a great one if it doesn't offer a great jackpot, so all our recommended slots have absolutely massive top prizes.

Bonus Features: Do you love slots with great bonuses? If so, you'll love the slots we recommend, as they have everything from wild symbols to free spins.

Bet Amounts: We want everyone to be able to play the slots we recommend, which is why we only give the thumbs up to slots with a wide range of bet levels.

When you play, you'll find that the wild symbol and the scatter symbol are both represented by the dragon. Getting three or more scatter symbols anywhere on the reels will lead to you receiving 10 free spins, and you'll be able to pick a special symbol from the list of symbols on offer - which will you choose? There are no other special features found at this online slot, though, making it one of the simpler games you'll find out there.

Some Merkur slots can be accused of slightly lacking in the graphics department, but not Dragon's Treasure. The symbols have all been created with care and everything fits with the medieval theme. Graphics aren't the most important aspect of a slot, but great graphics certainly enhance a game's overall enjoyment.

So, how much real money can you win when you spin the reels of Dragon's Treasure? Well, this slot has an RTP of 96%, which is pretty good when compared to most other slots. The top prize is an impressive 100,000 coins, which is won when you manage to get five of the blond hero symbols across one of the five paylines. Other high-paying symbols include the dark-haired hero and the dragon, the latter of which also acts as both the wild symbol and the scatter symbol. So, you'll really want to see the dragon symbol spinning into view as often as possible!

You can play Dragon's Treasure on pretty much any mobile device, providing it has a touchscreen and can be connected to the internet. So, you can use everything from an iPhone to an Amazon Fire, as well as every smartphone and tablet in between. This includes iPad, Samsung Galaxy and all devices from companies like HTC, Google and Nokia.

Some people worry that playing mobile slots while connected to 3G or 4G will completely drain their data, however this isn't always the case. Why? Well, it's because slots only use a very small amount of data when you play, so you'll be able to spin the reels all day without damaging your data allowance too much.

Of course, playing while connected to WiFi is still preferable, though, as there's always the chance that 3G or 4G coverage might drop out, thus causing your game to stop - something that you certainly don't want to happen when playing an online slot! If you're using an open WiFi connection, though, be wary of the fact that the connection might not be secure. So, save the deposits and withdrawals for when you're on a private connection.

Dragon's Treasure is one of the best slots ever released by Merkur, and this is saying something, as their portfolio of games is a great one. The prizes are high enough to excite everyone playing the game, while the gameplay is simple, yet still incredibly thrilling. So, if you're looking for a new slot to play today, Dragon's Treasure could well be the perfect choice!